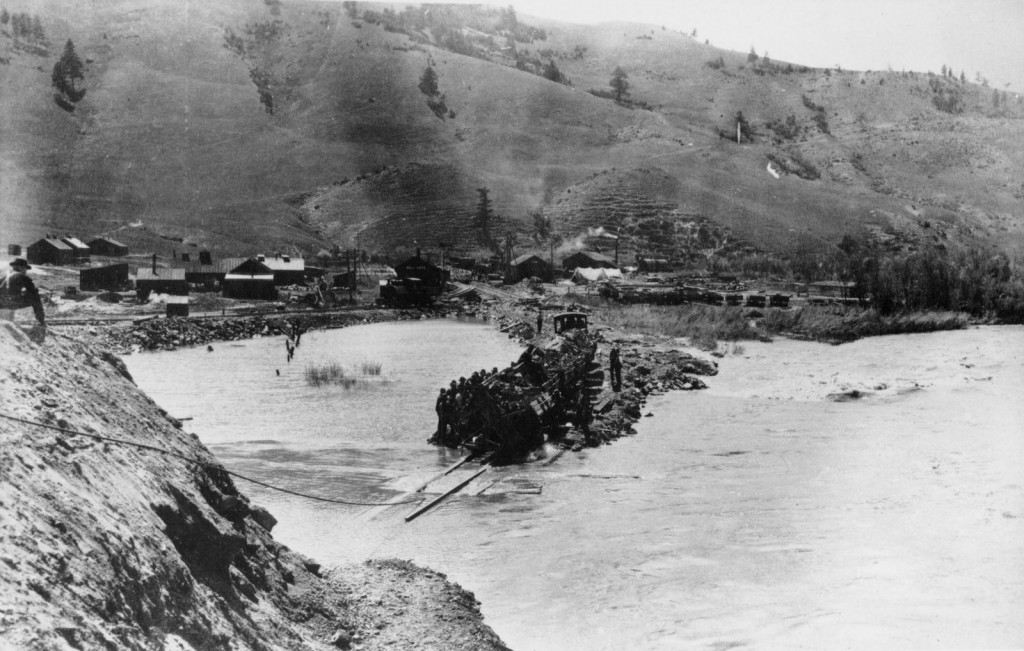 Butte was booming in 1908. For all practical purposes, the War of the Copper Kings was over, even though the Anaconda Company would not completely consolidate its ownership of nearly every mine and more until after William Clark died in 1925. After Augustus Heinze was out of the picture in 1906, money that had been tied up in litigation freed investors to build, build, build. The building boom of 1906-1907 saw some of the grandest construction efforts ever undertaken in Butte’s business district.

Among the buildings erected in that two-year period were the Metals Bank, Phoenix Block, Silver Bow Club, Leonard Hotel, Napton Apartments, the Water Company building (built initially for the Intermountain Telephone Company), the Carpenters Union Hall, the First Baptist Church, St. Mark’s Lutheran Church, and much more. The county’s population – mostly within the built-up area of Butte – was nearly 57,000 in the 1910 census, a gain of more than 20% since 1900. And in 1908, the city directory listed 324 named mines.

With all that construction, attention was also finally paid to street paving and sidewalk construction. In June 1908 the city council was looking at a huge project to permanently pave sidewalks on residential streets all around the central business district, including much of Granite, Quartz, and Wyoming. Wooden walks were on the list for Woolman, Copper, Henry and Front, as well as much of the East Side. Street paving was in the offing for the near West Side including West Granite and Broadway, Idaho and Washington. But until the paving was completed a few years later, ruts and gullies must have been common on unpaved streets, and boardwalk sidewalks, where present, could have washed out easily.

Unpaved roads, walkways and extensive mine operations all over the Hill – just imagine 324 mine dumps, some huge, some small – meant that stormwater would likely have not just run off, it would have run off carrying plenty of dirt and debris with it.  Both in the city and nearby, pretty much all the trees were gone. Summit Valley’s forests, such as they were, were exploited early on for fuel in smelters, timbers in mine drifts, and wood for building construction. The land was bare. Mine tailings and sewage alike were discharged into Silver Bow Creek.

Silver Bow Creek, where it crosses Montana Street and flows between the historic slag walls from the Colorado Smelter, was highly constricted there. Upstream, wetlands had been drained to accommodate construction of smelters on the east side of the Hill, in Meaderville and points south. The stream was already nothing like the original creek that the first prospectors in 1864 likened to a silver bow glistening in the sun. There was little to prevent mass runoff and flooding.

Late May and early June, 1908, were some of the wettest days in Montana history. Rain, wet snow, and snowmelt combined to produce one of the most devastating floods to ever hit the region. On May 31, 1908 a cloudburst at Columbus took out a mile of Northern Pacific track. In Butte, there was “too much snow” for Memorial Day services, and the parade was cancelled. On June 2, Butte received 0.9” of rain, part of a storm system that affected most of western Montana and disrupted train travel. On June 2, a washout at Bonita, about thirty miles east of Missoula, resulted in a train plunging off the track, killing one man. By that day, there had been no through train into Butte for 48 hours on the Northern Pacific, whose trains were stalled in Billings and at Drummond. And it continued to rain and snow. At Elk Park on June 2, the Butte Miner reported that “the flat resembled a huge lake, and the Boulder River is a raging torrent.”

June 4, 1908, was a Thursday, and the devastation really began to impact Butte. The dam at White’s Ice Pond (Alcova Reservoir, where the Butte Country Club is today) failed. Water rushed down to Silver Bow Creek, already swollen, which inundated the Montana Power Company substation at Oxford and Montana Streets, where the water was four feet deep. Silver Bow Creek was reported to be a mile wide. And on June 4, the rain changed to snow. Nine inches fell that day, dropping power lines all over the city. Any power that remained to transmit was cut off to avoid electric shocks from downed lines – a team of horses from the Lavelle Livery was electrocuted at Park and Washington, and several residents narrowly escaped the same fate. “Plague of Darkness Reigns,” the red-ink headline in the Butte Miner proclaimed. No street lights, no electric trolleys, no other power – except for the central business district, Park to Granite and Montana to Wyoming, most of which was served by the Phoenix Power plant in the alley south of City Hall.

By June 5, the situation with railroads was the “worst in history” in the state. Problems extended from Great Falls to Billings, and Butte to the Flathead, with landslides and washouts completely shutting down train travel. The Water Plant Dam at Great Falls collapsed, Choteau was “surrounded by water,” and the town of Belt was partially inundated. Passengers on the train stalled at Drummond practically ate Drummond out of food and drink over the three days they were stranded there. A man walked off a washed-out footbridge at Rocker, the first flood related death in Silver Bow County.

On Saturday, June 6, we saw “Entire Montana Now Paralyzed by Destructive Floods,” according to the Anaconda Standard. The big Higgins Bridge in Missoula collapsed the next day, joining every other bridge in Missoula County. The Miner reported that William Clark’s Milltown Dam at Bonner was safe, although at one point 15 feet of water was going over the spillway, and part of the structure of this brand-new dam was dynamited to allow more water to flow through.

The rainfall was not limited to Montana, but was widespread across the upper Missouri Valley. Flooding in Kansas and Missouri, especially around Topeka and Kansas City, was even more devastating to residential neighborhoods than were the floods in Montana. By June 7, the rains had slacked off, and the Miner reported that “a strange object appeared over the western part of the city, resembling a ball of fire. Later it was identified as the sun, which disappeared several weeks since.” But it was another six days before the story left the front pages, and many months before a semblance of normalcy returned to the devastated communities in western Montana.

The long-term legacy of the 1908 flood was the toxic mine tailings that washed down Silver Bow Creek and the Clark Fork River. Vast quantities, enough to cover more than 1,000 acres, spread throughout the watershed and piled up behind the Milltown Dam, ultimately killing life along huge reaches of the river. Today’s environmental cleanup, costing tens of millions of dollars, is necessary, not just because the mine operations were cavalier in their concern for the environment, but because one of the most intense periods of mine and smelter activity coincided with a remarkable period of rain and snow falling on a landscape that had been modified so it could not cope with the precipitation.